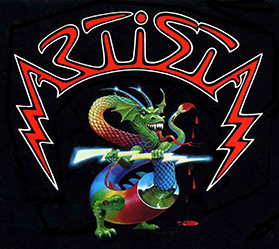 Artista really began in 1978 at the Peanut Gallery in San Rafael, California.  It was home to resident Artists Stanley Mouse, Alton Kelly, Victor Moscoso, Pat Ryan, Dave Sheridan, Tim Harris, Larry Noggle, Linda Miller and Enid Hanson. In October of ’78, they had a joint show at the gallery entitled “The Concrete Foundation of the Fine Arts Show” which was a rousing success. The following January they did another show at the Zamora Gallery In San Francisco, which Dave Sheridan and Pat Ryan did the art for. It had a Dragon on it squeezed from a paint tube, holding a lightning bolt. This was the Birth of Artista.

Unfortunately, the building that housed the studio at the corner of 2nd and B St. was sold and all the Artists had to vacate the premises. So, they all got together for one last show. In July, they held the first ever C.F.F.A. T-Shirt show. Since almost all the Artists were designing T-shirts at that time, (Mouse and Kelly owned Monster T-shirt Company), the show was a huge success! Once again Pat and Dave designed the postcard invitation art which would eventually be turned into a T-shirt. This time they were joined in collaboration on the art with Alton Kelly and Larry Noggle to create a most unusual design with the baby Artista Dragon wrapped peacefully around a concrete foundation, with a levitating Buddha/King Tut rolling a joint with San Rafael in the background and all the Artists reflected in his sunglasses.

The 80s began with a bang! Pat and Dave moved their studio to Fairfax, and in no time, Alton Kelly joined them to create a fabulous full color rendition of the Artista Rainbow Dragon. They had Black Satin Jackets made with red satin stripes down the sleeves and the Dragon embroidered in full color on the back. It was stunning and when people saw the jacket, they all wanted one… Thus began the beginning of the Artista Gang!  Eventually Artista had well over 800 members and the Parties they threw became a mythical legend in the Musical circles of Marin that lasted through the 80s. Sadly we lost Dave to cancer in 1982. Pat and Kelly carried on in Dave’s absence, surrounded by family and friends and a Colony of Artists. Pat got very busy, hosting the Harvest Moon Ball Parties and coaching the Artista co-ed softball team which won several championships in the San Geronimo Valley softball league!

Some of the musical talent that played in the Artista Parties included a variety of House Bands, Guest bands and guests: Smoke Inc., Zero, The Dinosaurs, The Tubes, Roy Rogers and Norton Buffalo, the Freaky Executives, Ron Thompson, Tommy Tutone, Terry Hagerty, The Sons of Champlin, and Huey Lewis and The News and many other bands wanted to play for Artista!  The cool thing about Artista parties was that they held parties at very different venues every time and the outside world wasn’t invited nor did they have a clue about who they were or what they stood for.  It looked pretty cool with several hundred people wearing the same jacket – people didn’t know what to think!  They seemed to be everywhere, they couldn’t walk down the street with their colors on without someone honking their horn or greeting them on the street.  They looked like a gang but they acted like a bunch of stoned out hippies, which they were.